Our Progress – Halfway Point of the Climate Action Plan 2.0 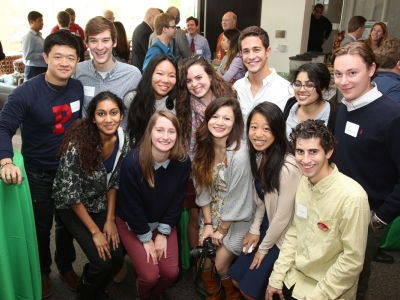 The spring of 2017 will mark the halfway point of the Climate Action Plan 2.0 (CAP2.0), Penn’s five-year plan for a more sustainable future – a good time to take stock of our progress.  Much has been accomplished since the launch of the CAP2.0 launch in October of 2014.

Greenhouse Gas Emissions Reductions:  With the release of Climate Action Plan 2.0, Penn set two goals: a 7% GHG emissions reduction by 2019 and an 18% reduction by 2042, both based on 2014 levels.  As shown in the graph below, Penn is on track to meet or exceed both goals.

Since 2009 and the launch of Penn’s first Climate Action Plan, our overall emissions have dropped an impressive 14.9%. Most (over 95%) of that reduction has come from the “greening” of our energy supply, including the increased use of renewable energy nationwide, improved power plant efficiencies, and the gradual phasing out of coal-burning generation stations.  Penn’s conservation efforts in building energy efficiency, waste minimization, and the adoption of conservation-oriented habits by the Penn community are estimated to make up the remaining 5% of this reduction so far.

Moving forward, we expect to see greater reductions from our building efficiency efforts.  In particular, the comprehensive heating, air conditioning, and lighting upgrades in the first three buildings recently completed as part of the “Century Bond” projects will reduce campus emissions in future years by an estimated 2%.  The current scope of ongoing and future such projects includes 11 buildings in total, and we’re looking forward to assessing their additional impact.  Accelerated recommissioning projects (building tune-ups), now at 13 or more per year, improve building performance while also addressing occupant comfort.  And our energy reduction campaigns such as Power Down Challenge educate the entire Penn community around the importance of reducing greenhouse gas emissions.

Operations and Utilities:  Energy use on the main West Philadelphia campus (for building heating, air conditioning, lighting, and equipment) has decreased by 1 percent since 2009, even after taking into account an 11.5% growth of campus (over 1.5 million square feet).  The success of the conservation initiatives noted above is apparent in the measurement of Penn’s energy use per square foot – a reduction from 209 to 186 kbtu/sf over the last six years, representing an 11% rise in building efficiency since the launch of the CAP in 2009. 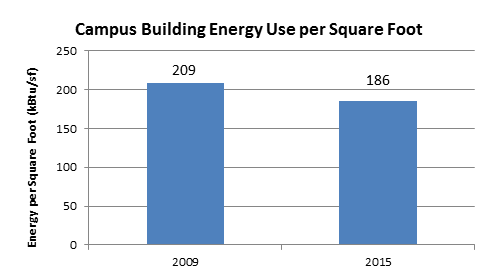 Penn’s Freezer Replacement Program, a notable initiative of the Operations and Utilities subcommittee, is designed as a cost-neutral way to improve the efficiency of this critical piece of lab equipment.  Participating labs receive a rebate from the Sustainability Office for purchasing higher performing ultra-low temperature freezers.  As of December 2015, over 45 labs have participated and total rebates have exceeded $80,000.

Academics:  The Academics Subcommittee of the University’s Environmental Sustainability Advisory Committee (ESAC), led by professors Jane Dmochowski and John Keene, has provided support to the Penn Sustainability Office in efforts to expand broad awareness of sustainability issues among Penn’s students and faculty (see p8 of the CAP2.0):

Physical Environment:  Penn’s campus continues to grow greener since the launch of the CAP2.0, with all new buildings and major renovations a LEED-certified Silver or better, the implementation of new Green Guidelines for Renovations for campus renovation projects, and the ongoing development of new landscape maintenance standards that emphasize healthy ecosystems.  The result is a cleaner, healthier, and greener urban campus, benefitting the entire West Philadelphia community.  Since 2007, Penn has added 19 new or pending LEED-certified projects and has added 27 new acres of gardens and athletic fields.

Waste Minimization:  With the launch of Climate Action Plan 2.0 in 2014, Penn has been working to both minimize waste and increase our recycling rate to 30% by 2019.  The adoption of a number of waste minimization strategies – including composting of cafeteria waste, minimizing package and delivery waste by Penn Purchasing, and promoting waste-conscious individual behaviors – has resulted in a 21% decrease in campus landfill waste since 2007 – from 6,000 tons to around 5,000 tons.  We know that we can further minimize waste by improving our recycling and diversion rates, and will continue to challenge our campus community to reach our 30% goal.

Sustainable Transportation—50% of Penn commuters now use public transit, walk, or bike.  Since 2012, the number of secure bike racks on campus has increased to over 6136, up from approximately 4,500, and Penn has added three self-serve bike repair stations as well.  Starting in calendar year 2017, Penn will implement a new reimbursement program to bike commuters for minor repairs and supplies (up to $240 annually), further demonstrating the University’s commitment to low-impact commuting.

Engaging the Penn community—Penn’s Green Fund made 58 grants to faculty, students, and staff totaling over $1.2m over the last six years, and whose ideas are generating cost saving and reducing our carbon footprint.  365 students and more than 120 staff have volunteered as Eco-Reps over the past five years, championing sustainable actions in offices, labs, college houses, student organizations, and athletic teams.  Over 2100 administrative and academic staff in 75 offices have worked to make their offices more sustainable by participating in the Penn Green Office program, sharing and adopting proven best practices for purchasing, waste minimization, and energy conservation.