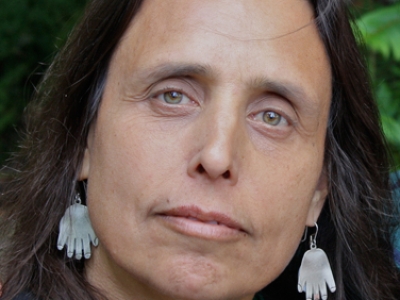 The Penn Humanities Forum welcomes Winona LaDuke on Thursday, October 13th. Renowned for her work on tribal land claims and preservation as well as sustainable development, Winona LaDuke will discuss her White Earth Land Recovery Project on the White Earth (Anishinaabe) Reservation in Minnesota. She will also discuss Honor the Earth, a Native-led organization LaDuke established with Indigo Girls Amy Ray and Emily Saliers, which works to raise public awareness and support for Native environmental issues. Inspired by Anishinaabe prophecies about the time of the Seventh Fire, LaDuke surveys the two paths—or miikanan—that lie ahead: one that is well-worn but scorched, and the other that is green. Bethany Wiggin, topic director for this year’s Translation Forum, joins LaDuke onstage following her remarks for a conversation on how Native leadership today is creating integrated ways of knowing and being, from traditional environmental knowledge to the environmental humanities.

Because of the urgent situation at Standing Rock—a gathering of the tribes viewed by many as the most widely important event in Indian Country since Little Big Horn—Ms. LaDuke will remain at the site of the ongoing protests and join the Penn Humanities Forum and American Philosophical Society via large-screen video. She will make a statement live from Standing Rock about events unfolding there, and then converse with the scholars and activists gathered on the Forum's stage and with the audience.

The Green Campus Partnership is co-sponsor of this event.