The campus development plan, Penn Connects, recommends sustainable development for all new projects. Every new building and major renovation project currently under design is registered with the US Green Building Council and is targeting Leadership in Energy and Environmental Design (LEED) Silver rating or higher. (In addition to the list below, a number of projects have been submitted to USGBC and a decision is pending.) As of October 2021, University projects include: 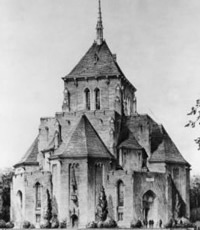 Well built, durable lasting buildings are our most sustainable tradition:

Irvine Auditorium (pictured above) was dedicated to the Curtis Sesquicentennial Exposition Organ on May 9, 1929. The building's design was directed by the Horace Trumbauer firm, led by chief designer Julian Abele, the first African-American graduate of Penn's School of Architecture (1902). 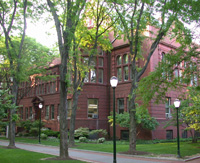 Sustainability requires not only looking at present and future needs, but also drawing upon the lessons and resources from the past. Adaptive Reuse of buildings is now an important part of the sustainability movement. Examples of adaptive reuse on Penn’s campus include: